Are you a movie junkie? Then you’ve come to the right place. So here, we will look after the movie Pushpa: The Rise. Well, not only me, but almost everyone is considering it to be the best south Indian movie, trending nowadays. Additionally, the best part is that the movie is hitting the Hindi box office in a short time span. So without wasting any time, let’s move on to see why viewers are considering it the best south Indian movie? What’s the story, casting, and everything? Read on to grab the entire knowledge. So let’s begin.

Written and directed by Sukumar, Pushpa: The Rise – Part 1 is a 2021 Telugu action drama film. In association with Muttamsetty Media, it stars Allu Arjun as the titular character alongside Fahadh Faasil as well as Rashmika Mandanna while Jagadeesh Prathap Bandari, Sunil, Rao Ramesh, Dhananjaya, Anasuya Bharadwaj, and Ajay Ghosh perform supporting roles. This film tells the story of the rise of a coolie in the smuggling syndicate of red sander, a wood that grows only in Andhra Pradesh’s Seshachalam Hills.In Hindi, Pushpa (Starring Allu Arjun) grossed 45 crores at the box office; This was a blockbuster. Pushpa has swept the Hindi belt with 67 crores collected in 20 days from the dubbed version. 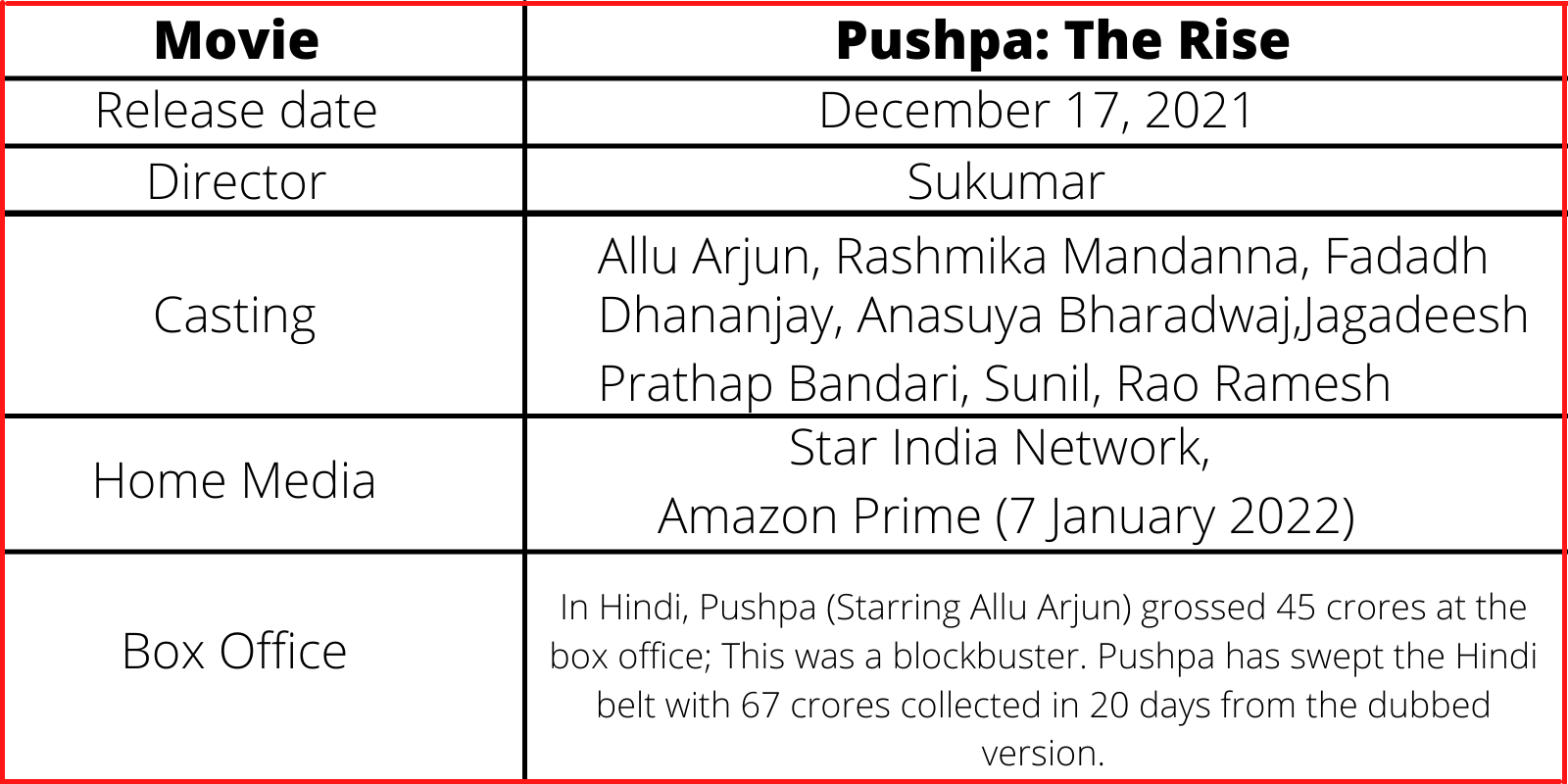 As if you are a bit familiar with the movie, let’s see why viewers consider it to be the best south Indian movie.

Story of Pushpa Movie Let us briefly read out what the movie is all about:

Pushpa Raj is an Andhra Pradesh coolie who smuggles red sanders, a rare wood that grows only in the Seshachalam Hills in Chittoor district. A forest raid by the DSP Govindappa leads to Pushpa hiding and recovering stock, thus gaining the trust of Konda Reddy. He becomes Konda Reddy’s partner after coming up with novel ideas to smuggle red sanders. As the manager of the Red Sanders syndicate, Mangalam Srinu entrusts 200 tons of his stock to Konda Reddy. Due to Jolly Reddy’s incompetence, Konda’s younger brother, Pushpa, gets the job. Pushpa then takes all the logs and throws them into the river, preventing Govindappa from seizing them. Pushpa hears that Srinu is selling wood for an outrageous amount at a party. Despite Konda’s demands for a fair share, he backs down for fear of upsetting Srinu.

Pushpa falls in love with Srivalli the moment he meets her. During their engagement day, his half-brother Mohan denies Pushpa’s lineage, claiming he is illegitimate. His mother got an injury in the ensuing fight. In turn, this angers Pushpa, which motivates him to move up in life. After smuggling the wood to Chennai, he meets Srinu and demands 1 crore per ton as their share. The men of Srinu attack Pushpa, but Pushpa defeats them. Pushpa and Konda agree to split the proceeds equally. Konda then goes to Chennai and cuts the deal himself.

While holding her father captive, Jolly blackmails Srivalli into spending the night with him. Jolly is temporarily paralyzed after Pushpa beats him severely. In disbelief, Konda tries to kill Pushpa but Srinu’s men ambush him. Pushpa counterattacks amidst the confusion. Pushpa saves the life of Konda’s brother Jakka Reddy. He also kills Srinu’s brother-in-law Mogileesu. Pushpa and Srinu sign a truce with MP Bhumireddy Siddappa Naidu. Pushpa takes over the syndicate. Within six months, Pushpa has become influential. Dakshayini slits Srinu’s throat after he was unable to avenge his brother-in-law.

During Pushpa’s prime, the district’s superintendent of police is Bhanwar Singh Shekhawat. The bribe Pushpa offers him is 1 crore. Shekhawat, meanwhile, intimidates Pushpa for his lineage and threatens to kill him for not unfolding his fingers. He backs down. Pushpa and Shekhawat share a drink at Pushpa’s wedding. During their first meeting, Pushpa expresses contempt towards his treatment. While Shekhawat undresses, he also does the same. Without his uniform as a syndicate boss, Shekhawat would not recognize him. Shekhawat goes back home naked while Pushpa leaves for his wedding. The prediction is that his dog will bark at him. He burns the bribe money and kills the dog in a fit of rage.

To be continued in part 2….

Therefore, this is all about the movie. But the question is still in mind why is this movie the best south Indian movie? Let’s see:

Why is Pushpa the Best South Indian Movie?

At the box office, Pushpa, directed by Sukumar, is unstoppable as Allu Arjun plays Pushpa. Although Pushpa had its world premiere on digital, the film continues to draw crowds in the cinema halls, as it collected Rs 4.5 crore in its fifth weekend, bringing the total to Rs 88 crore. On Friday, business soared in Gujarat in honor of Makar Sankranti, followed by another increase in collections on Sunday.

Well, no one can deny the fact that the movie is absolutely amazing. I consider it to be the best south Indian movie dubbed into Hindi. For me, it is a must-watch one. Especially, the dialogue “Pushpa ko Log Flower Samaj Baithe, Pushpa Fire Hai, Saala Jhukega Nahi.” This is incredible.

When we talk about the story and the acting, I must say Allu Arjuna did a commendable job. Gujarat, CI, Maharashtra, UP, and Bihar are places where Icon has loyal audiences that support Hindi circuit films. There will be a major fandom boost with Pushpa: The Rise, and going forward, every Allu Arjun film will have some business expectations in the Hindi belts. Considering his fanfare at present, Allu Arjun might be able to compete with the newer generation of actors, and with age on his side, if he chooses the right role, the sky’s the limit. After Prabhas, Allu Arjun became the second actor from the Telugu film industry to get accepted by the Hindi-speaking audience (Post Bahubali).

Not only Allu Arjun, but all the co-actors did an amazing job. I am looking forward to the release of Part 2 of the movie and another upcoming movie of Allu Arjun titled Ala Vaikunthapurramuloo. Ala Vaikunthapurramuloo will likely do well at the box office after the delay of three long years. Discussions around the film’s possible release date have already begun. Let’s see what happens.

Note: This is my personal point of view about the movie, so no offenses.

5 Best Places To See Snow in Winter in India

What is Telehealth Services: Why You Need It And How It Is Helpful 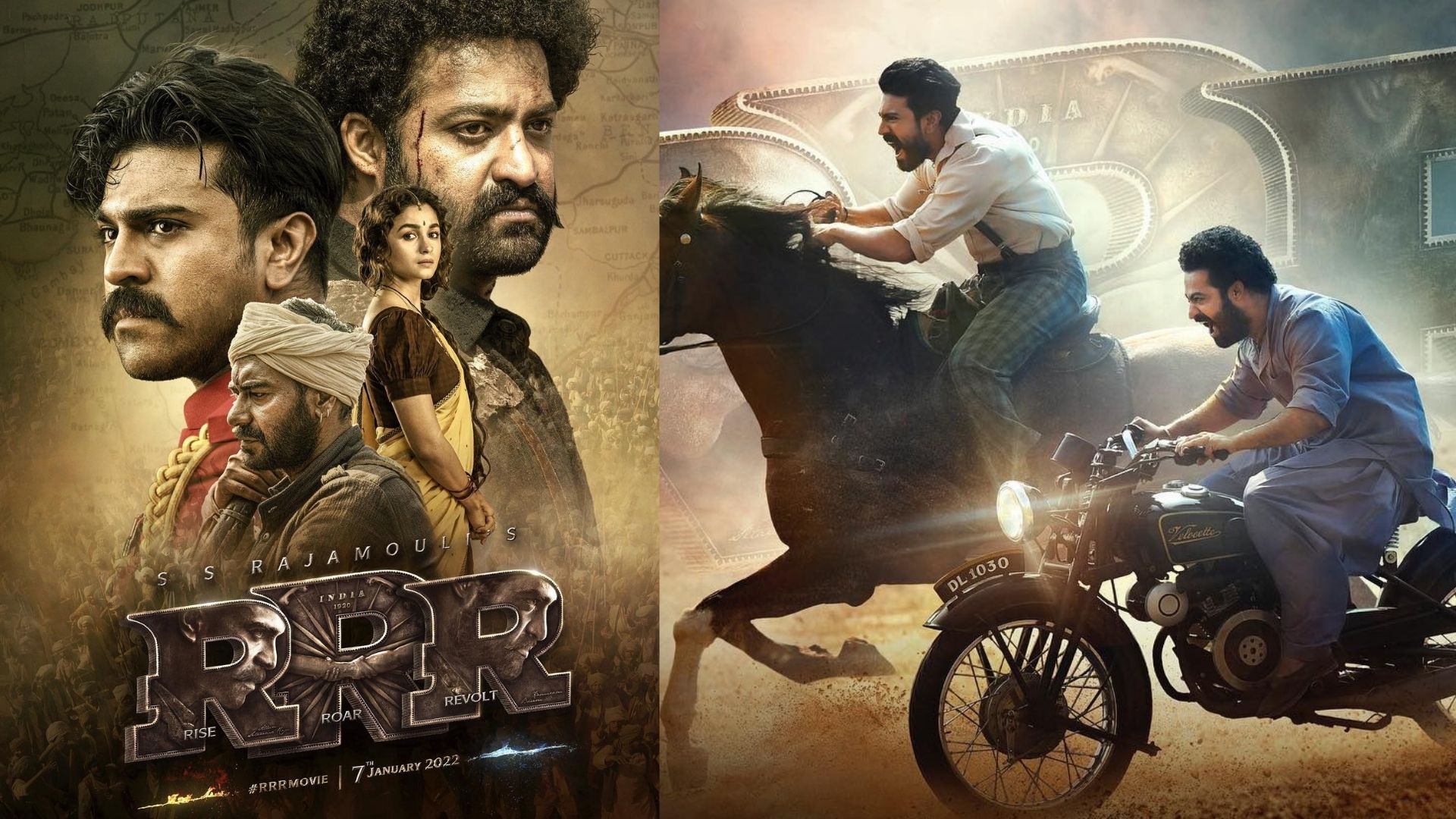 When the RRR (Rise, Roar, Revolt) came out, there was an expectation that the ... 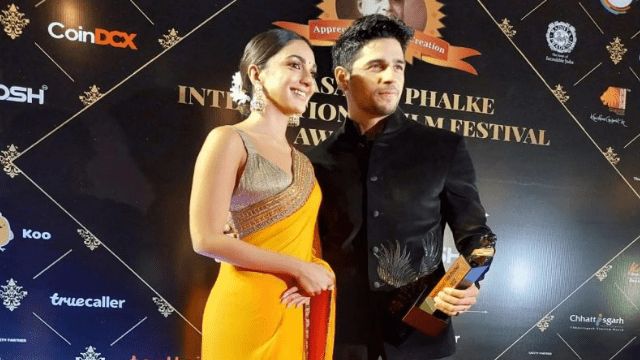 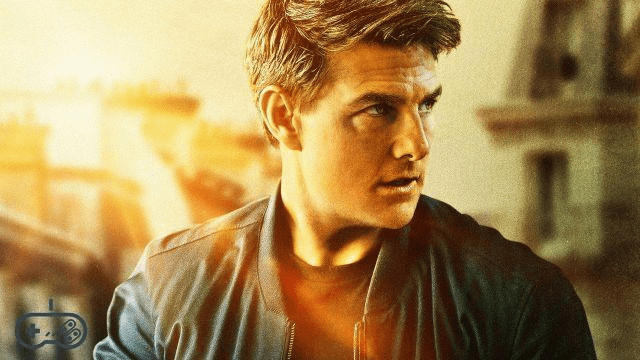 Tom Cruise, needs no introduction. He is famous, he is handsome, he is a ...